The 30.45 metre motor yacht Princess Three has been delivered, her builder Princess Yachts has confirmed. 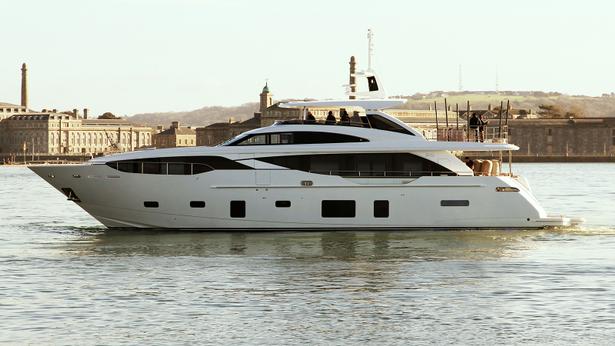 Accommodation on board Princess Three is for up to ten guests split between five cabins, including a main-deck master suite. Meanwhile, her crew quarters allow for a staff of up to five people.

Key features include a spacious superyacht sundeck, which has been fitted with the optional spa pool, making this area ideal for al fresco relaxation. Her interior décor is described by the yard as “timeless and contemporary, offering relaxed, yet sophisticated living”.

Built from a GRP hull and superstructure, Princess Three features a beam of 7.05 metres and a maximum draught of 2.06 metres.
Power comes from a pair of 1,900hp Caterpillar C32 ACERT diesel engines, which allow for a top speed of 22 knots, as the Princess team confirmed on sea trials shortly after her December launch.

Other projects currently under development at Princess Yachts include the new 24.66 metre Princess S78 sportsbridge series, which made its public debut earlier this week at the 2018 Düsseldorf International Boat Show. The yard adds that the first ten hulls have already been sold and it is on course to break its sales record for the show.